Robert Lenkiewicz's life was unconventional from the start. Born in north London in 1941, his parents fled to England from Germany just before the war started. They met and married in London. As with many other German Jews who came as refugees to London, few members of their extended family survived the war. They set up a small hotel in Cricklewood. The three Lenkiewicz boys grew up there, surrounded by elderly Jewish residents of the hotel, some of whom were themselves refugees from the holocaust. Lenkiewicz’s early memories were of the often elderly and distressed, sometimes demented people who made their home at the hotel. Thus he experienced at first hand and at a young and impressionable age the impact that dispossession and violent prejudice could have on people. 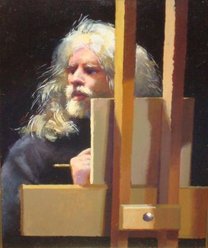 Lenkiewicz had a difficult relationship with his mother, who doted on him but was also very controlling. As soon as he could, he lived most of his life privately, either in his room or out in the streets. He began to paint at an early age - encouraged by his mother - and, when his precocity was recognized, he was sent to the Christopher Wren School aged around 13. From there he went to St. Martins in London and then to The Royal Academy School. From the outset, Lenkiewicz “painted a thing to look like a thing”. He proceeded along a pathway of figurative painting, looking sideways, as he says, at “all the other stuff that was going on” but somehow not attracted to it for himself … no matter how interested he was in it. Really he was an autodidact with regard to painting, despite the art school training. Similarly, although he was attracted to knowledge and profoundly respected scholarship, he didn’t benefit much from being taught directly. His teachers, he says, were the paintings in The National Gallery and the books in his library. The University of Plymouth awarded him an Honorary Doctorate in 2000.

Parallel with his painting life, and from an early age, Lenkiewicz begun to undertake private study & research and to collect the books that he needed to satisfy his incessant curiosity and his obsessive bibliophilia. The two deep loves, painting and the creation of the library that together so profoundly formed his life, were deeply rooted within him by the time he was 17. He was of course by that time also very preoccupied with women.Lenkiewicz had left home by the time he was 18 (after a final row with his mother), and was living in a series of chaotic lodgings and studios around Hampstead.

He was by now living pretty much at the edge himself: often penniless, painting gigantic canvasses on odd canvasses, getting slung out of various rooms by landlords and mixing with difficult people. Life was hard but very stimulating and he was supported mostly by his mother and by girlfriends. Then, in 1965, quite abruptly, he left London with his young wife and their baby daughter and went to the West Country where he eventually settled in Plymouth. A new stage in his life was about to begin. In Plymouth, Lenkiewicz lived a life that, by all accounts, remained impoverished and chaotic. He was still intensively involved with people who the world would describe as ‘down and outs’. He had no means to support himself and his dependants. Knowing the value of antiquarian books, he took some from the City Library’s Cottonian Collection and sold them in order to raise money. He was arrested in 1970 for stealing books and imprisoned briefly. This experience may well have been some sort of a trigger for him; he would have been confronted with the need to change.

By then a large collection of paintings was accumulating in his small Barbican studio and his multi-layered ideas about the people he was painting suddenly crystallised into the notion of having a huge exhibition. Lenkiewicz would frequently say that he had “no interest in issues of high art” and he would completely decry any altruistic impulses. His motives in setting up this first major exhibition were complex. He certainly wanted to draw attention to these people (who he called Vagrants) and to issues that confronted them.….but he would not have been unaware of the possibilities for attracting attention to the work itself, and to the possibility of selling it. He described the Vagrancy Exhibition as a sociological survey rather than an exhibition of paintings and wanted the works to be seen ‘en masse’ rather than as individual pieces. He dismissed the idea of ‘art’, preferring to cloak himself in the role of researcher.

The Vagrancy exhibition, held in Plymouth in 1973, attracted no critical attention but did have a significant impact in Plymouth. It also made him realize that he had found a way of creating a lot of interest and provoking thought, albeit only locally. He had discovered that he could run a large attractive exhibition that ordinary people would visit and he saw that commentators & critics from the ‘high art world’ would not. He realized he should control the whole presentation process himself, show the work in his own premises and go his own way. The idea of making work for specific projects took shape; the projects became very much about “presenting information” and also, crucially, he saw the exhibition as an entity i.e. the individual pieces were subordinate to the whole. This began to impact on the way he painted and on the things he painted and his work became increasingly driven by the ideas contained within the research areas. Similarly “the projects”, as he was now calling them, began to impact on his book collecting. This recursive relationship took root and people who knew him and discussed his ideas with him will have heard him expounding on this many times. This way of being, as painter/researcher, was to shape the rest of his life.

Lenkiewicz was a master draughtsman, and, as a painter, was also profoundly involved with the people he painted. You need only to look at ‘Kevin Gasson’ to see Lenkiewicz as painter and humanist.The work was part of the ‘Mental Handicap’ project that included more than a hundred studies that Lenkiewicz made between 1974 & 1976 and exhibited in a major exhibition in 1976. Never forget when looking at each piece that it is a part of a whole. He wanted projects to be seen in their entirety and for the visitor to feel provoked by the mass of pieces that collectively created the impact he wanted. As a draughtsman, Lenkiewicz’s particular mastery of portraiture is evident from the paintings and drawings that you see here. He often asks us to concentrate on the head, sometimes even right in on the gaze but he provides us with enough scaffolding in the way he shapes the body and sets the context so that we can be aware of the focus of the piece in its entirety. His assured touch with the human body, evident particularly in the exquisitely sensitive drawings, astonish the eye and always make us aware of the subtleties of the form he has created. When considering his remarkable technical abilities –he describes himself as “the best bad painter I know” - it is tempting to dismiss the work as facile but the distinctive Lenkiewicz style that connects painter to sitter to viewer in a sweep of emotional intensity and a flurry of painterly strokes belies this judgment.

Very few painters have the ability to handle large groups quite as convincingly as Robert Lenkiewicz, and it’s not an easy thing to do. These paintings can masquerade as narrative pieces or even as morality tales, but this is to misread them. They are often focal points for a project and as such comprise part of the whole but they are always foci for the painter himself to relish the pleasure of creating a large feast of paint. His use of colour is remarkable; it never distracts us from form but enhances our understanding. Sometimes we are drawn in by it, experiencing the close proximity of the sitter. Sometimes a muting of tones provides what feels like space to reflect. In this exhibition you can see his palette changing through the decades and you can see his handling of paint making us aware of the humanity of the person who is being portrayed. Read more...

"He was a master draughtsman" Joe Stoneman 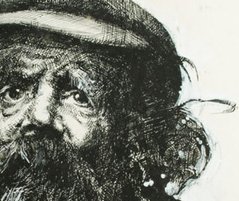 "A tramp who's involvement with Robert made him almost as well-known as Robert himself; due, in part, to the 'embalmed-body fiasco' that followed after Diogenes's death. He was a strange character, who's home, when Robert discovered him, was a discarded concrete barrel, perched precariously on top of a sloped bank of a rubbish tip! Robert nicknamed him 'Diogenes', after the Greek philosopher who allegedly slept in a terracotta olive barrel." Joe Stoneman.

A detail of a now destroyed large painting (due to a house fire) - 'The Burial of Mr John Kynance',1973.