"When I first met Diogenes he was sat behind a hatch half-way up the stairs in Robert's Barbican studio. He didn't speak to me, except for perhaps a faint grunt as I walked away. I thought he might even be mute or something, but no, he was just indifferent to me and apparently wasn't too keen on children. Although, he'd no doubt lived a pretty hard life." Joe Stoneman. 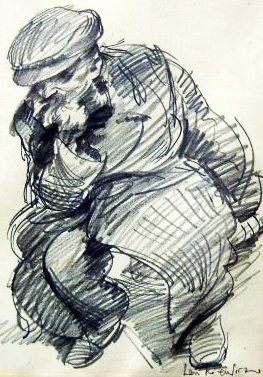 Lenkiewicz met Diogenes, a former flyweight boxer who's real name was Edward McKenzie, in the late Sixties, and for several years he was among Lenkiewicz's closest companions. Says Robert: "I called him Diogenes after the philosopher who lived in a barrel because I found him living in a concrete barrel, a circular container, in the crook of a tree looking down onto Chelson rubbish tip, a precipitous drop, and he had lived in there for nine years. I remember lifting up some of the coats that he slept on to find the whole thing teeming with maggots, so he was a pretty rough and ready character.

He certainly looked like your archetypal medieval scholar, Trithemius von Spanheim say, with a great beard and so on. I became friendly with him and began to visit him up there and do watercolours of him on site. There is a coloured photograph on the front cover of one of the early Telegraph magazines which shows me, young and beardless, drawing him and Diogenes smoking his pipe, which he had smoked since he was twelve! If Diogenes was to be believed, then he had designed and built the Civic Centre building; he had a market garden business with 300 employees; he had won the Grand National once and the Derby twice; he had played for Arsenal; and he had built the Tamar Bridge. And these are only some of his achievements. He lived in my studio and surrounding buildings with me for fifteen years. Then, as he was dying, we had an understanding; he very much had the policy of “live while you can and live in clover, when you’m dead, you’m dead all over” — he didn’t much care what happened to the corpse. After he died I kept the agreement, which was to take the corpse, the “vacated premises”, and pass it on to a local funeral parlour who could embalm him effectively, and this was done. And it was done effectively because I have the corpse to this day.

There was a lot of fuss. I kept quiet about it for six or seven weeks, but then someone complained to the health authorities that no one had been buried or cremated under the name of Edward McKenzie. I can remember when I had to register the death they asked me, “Is he going to be buried or cremated?” And I said, “He’s not going to be buried,” which was exactly the case. They assumed that he was going to be cremated, but actually I hadn’t said so, so that was all sorted.

However, the health authorities came along here some seven weeks later; they got very upset about it and I asked them to leave. I had already made enquiries; there was no property in a body, finder’s keepers, an example of possession being nine-tenths of the law. “It might ’appen in Mexico or in Sicily, Mr Lannevitch, but it ain’t going to ’appen in Plymouth.” I reminded them that it already had happened; there was a Palaeolithic man and two Egyptian mummies in the City Museum—was the objection to mine simply that it was new? I wasn’t even going to exhibit it, yet there were 15,000 exhibited corpses in England alone.

Anyway, they weren’t having it and one thing led to another. For a few weeks the world went mad, the press and so on… I was made to look completely unhinged, whereas originally it was just a rather unusual philosophical artefact whose fate had been agreed upon by myself and the artefact. Eventually, there had been so many break-ins in different studios and at my house to look for the corpse that it got rather fatiguing. So with a close friend of mine we arranged, with the help of a couple of journalists, that the corpse would arrive here at a certain time and for the health authorities to hear about this. My friend drove this big lorry and half a dozen associates of mine placed this large box outside the front door here. There were about seven or eight strange people outside, very smartly dressed, pretending to take photographs of the mural like innocent tourists, even though it was freezing weather. We’d also been informed that round the corner a hearse had mysteriously appeared.

We let the health authorities freeze there for a couple of hours because we knew they couldn’t seize the corpse on the Queen’s highway; they would have to seize it on my property. It was then brought in and they did indeed burst in very aggressively, held a couple of people up against the wall and took some kind of crowbar to the box and lifted the lid. I sat up, wrapped in a duvet with a hot water bottle. I had a large sign in Latin, saying “Verumne tenet TSW” — “Does local television tell lies?” — and then “HABEAS CORPUS”. Well, they were quite apoplectic. This incident was reported in the local papers along with all the other nonsense and they were embarrassed into silence. They left me alone from then on."

Your purpose in the experiment?

"I was building up a library on the theme of death and I thought that at one point it would be very nice if the library room on death had artefacts that related to the theme. I had all kinds of things; an unusual collection of skulls and objects of one kind or another that related to death, and felt there couldn’t be anything more thought provoking than the corpse of a human being. Had I had my wits about me earlier on, I would have much preferred my mother, but Diogenes was fine. It was surprising how many visits and letters I got from people offering me the same service; that is to say, that they would also like to be embalmed."

What kind of reaction did the corpse provoke amongst people who saw it?

"There was a phrase I used: that one can be very struck by the total presence of the corpse and the total absence of the person, particularly if one knew the person. This is the primary sensation, in my view, that one gets in viewing a dead body, and I’ve seen many—the total absence of the person running parallel with the total presence of the corpse. And the corpse has menace, has potential for decay and putrefaction, almost like an attacking machine, but the person has curiously vapourized. I’m not making claims for self or soul or essence or spirit; I regard these all as poetic metaphors. But in witnessing a corpse one can certainly understand how these poetic metaphors arise."

Diogenes used to look after the studio and the exhibitions. Can you explain more about the actual set-up of the premises at the time? I don’t think it was quite the whole building as it is now?

"It started downstairs in the front window from 1969 onwards. And derelict buildings in the area that I would break into and take over. But slowly I spread through the whole building. That in itself is a long story with all kinds of chicaneries, but eventually I took over the whole building and decided to open all the rooms as spaces for presenting the Projects.

When you ascended the first flight of stairs there was a kind of arched opening where the door had been removed and Diogenes sat there, by a desk. There was a 10p entrance fee; Diogenes would be sitting there and would go “Ar… Ar… Ar.” That’s about it really. Sometimes,

they’d ask him a question and he’d go, “Ar… Ar.” He did it for fifteen years and he was very popular, but there were times when I wasn’t sure whether people were coming in to see Diogenes or coming in to see the exhibition. They were certainly very surprised by him as

they came up the stairs—this scrawny, miniature Father Christmas." 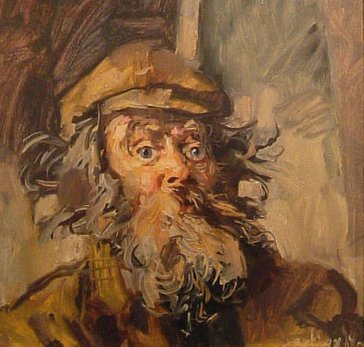 Some of Diogenes's own words of wisdom... 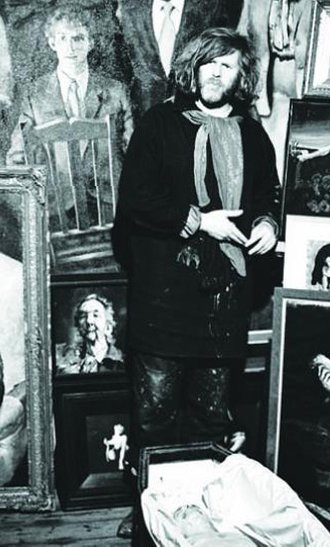 Robert in his studio with the body of Diogenes, circa 1984 (his body is in the coffin at the bottom of the picture). 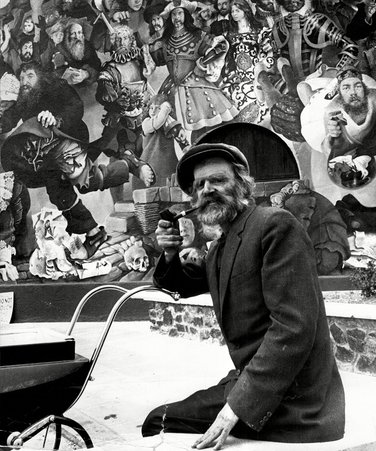 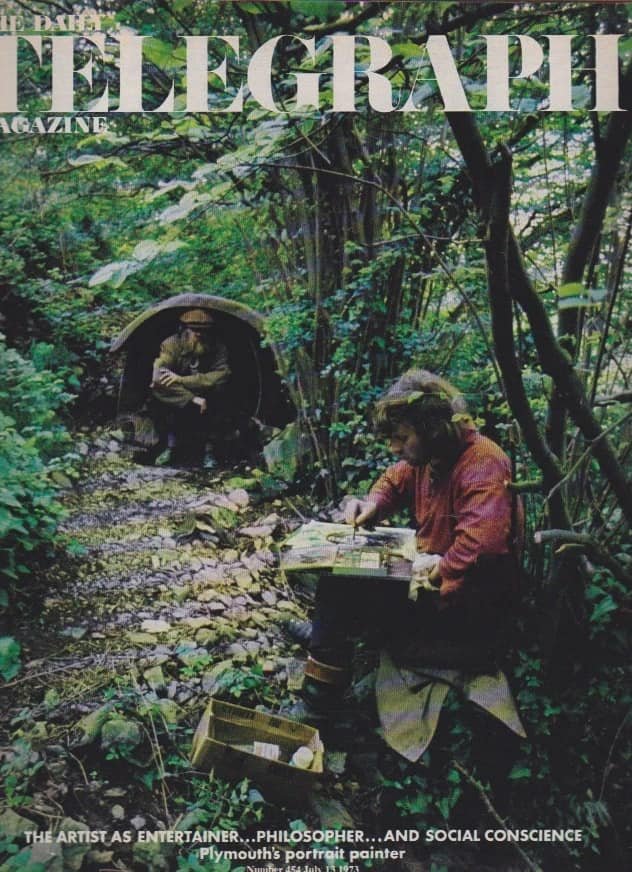 The cover shows Robert sketching Diogenes, who is sat inside his 'home'. His makeshift dwelling was situated next to a rubbish tip called Chelson Meadow Tip, in Plymouth (now called: Chelson Meadow Recycling Centre, of course!). Only the very hardy could live in these circumstances!

The front cover of the Daily Telegraph magazine in 1974. 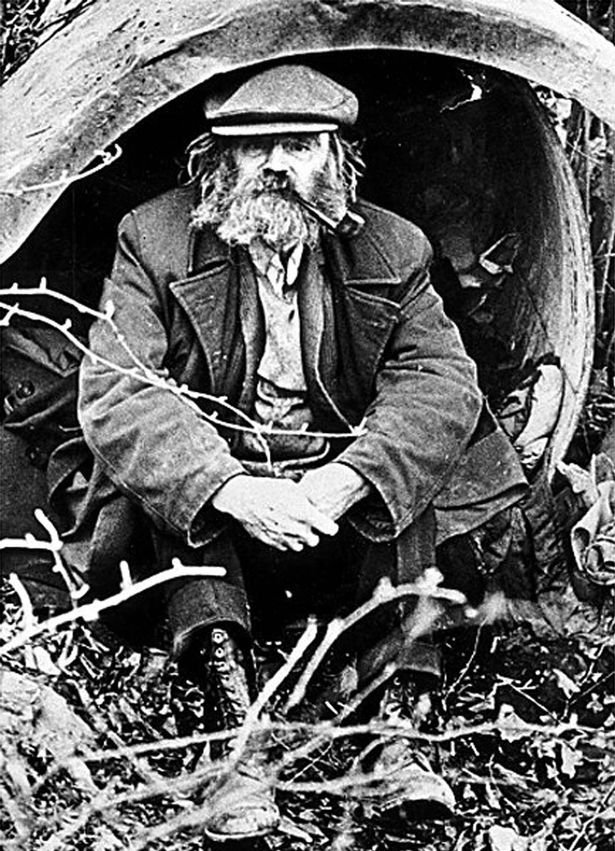 Diogenes was an outsider, so one can see why Robert connected with him.