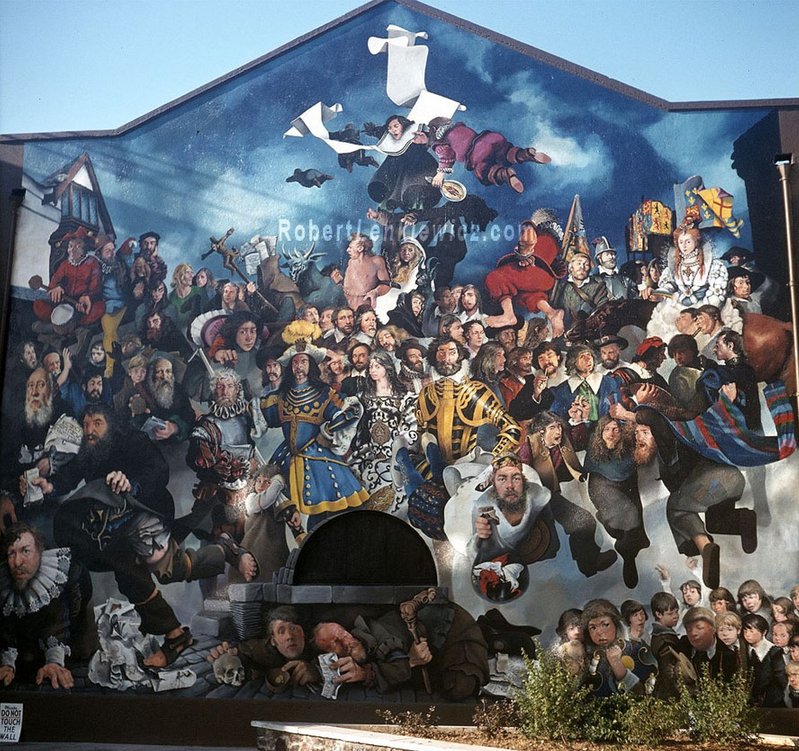 The Barbican MuraI. This is Robert's most well-known mural, but sadly, is now considerably faded and possibly beyond repair. 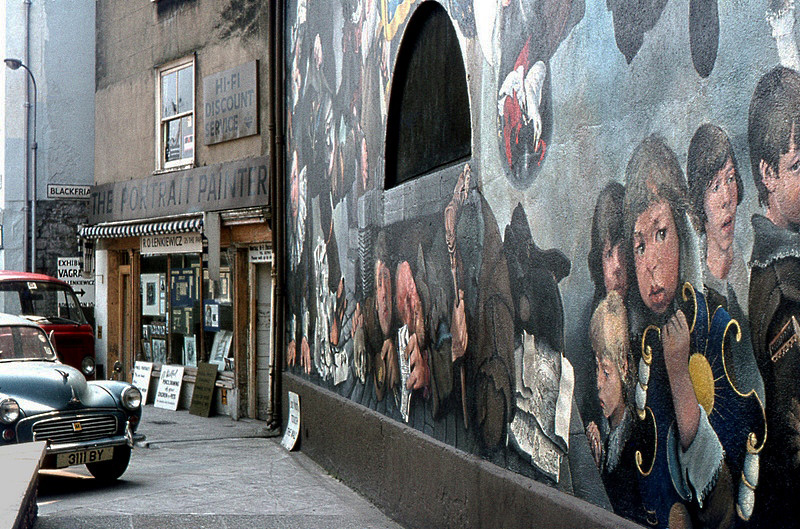 This early photograph shows the huge scale of the mural - at least twice life-size!

About the Barbican mural 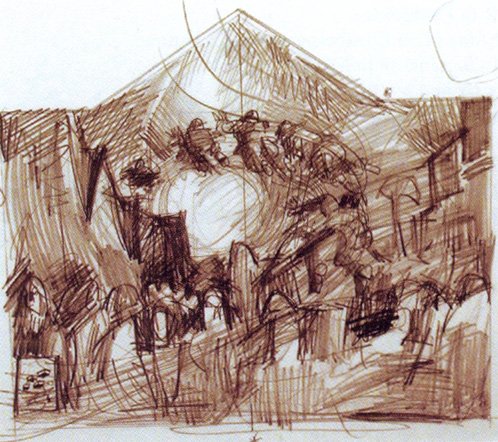 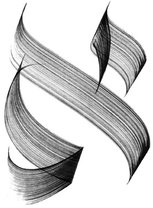 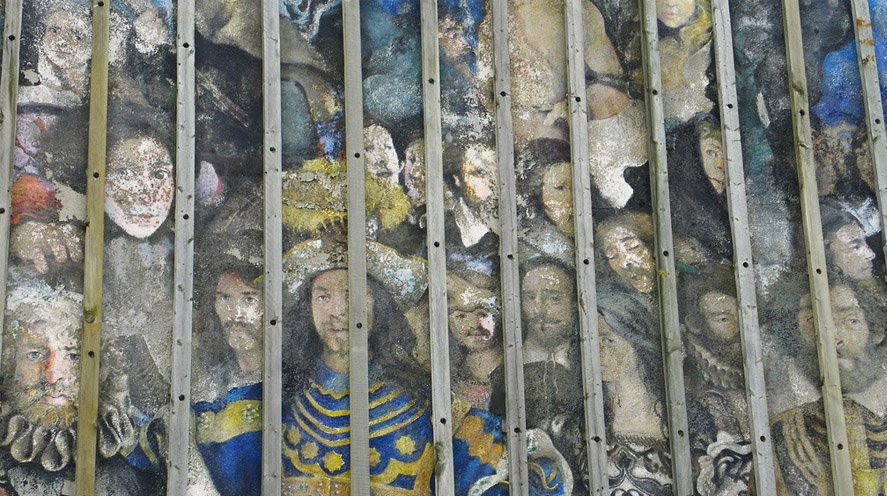 The Barbican Mural in 2010 - fading with its paint peeling off and covered with wooden batons. 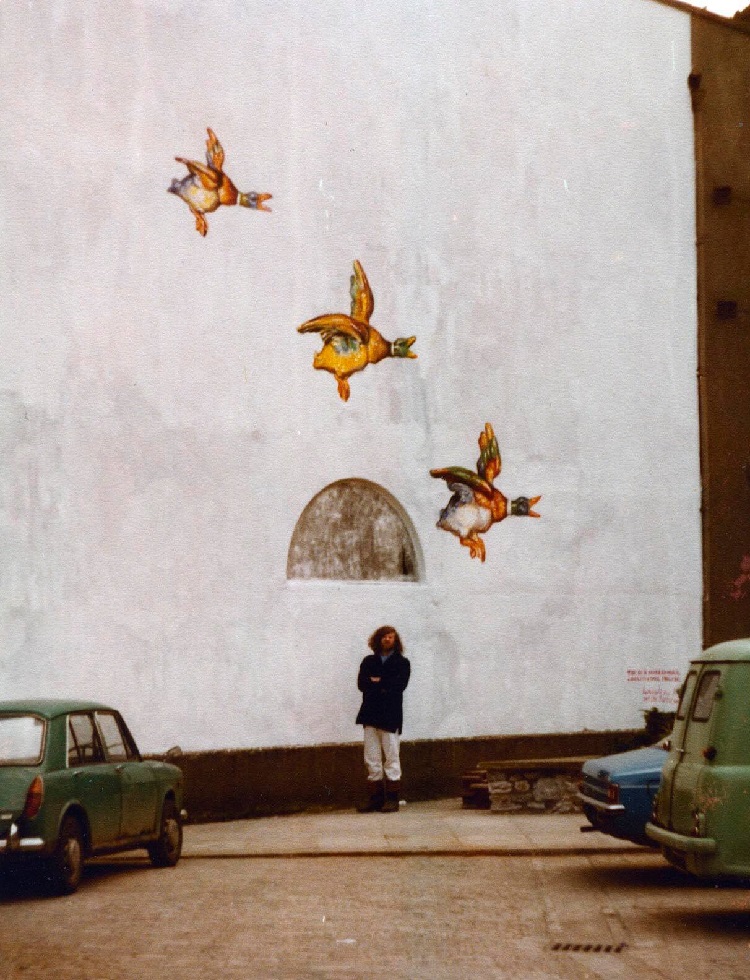 The Barbican Mural after Robert painted over it with white paint one night in the mid-1970's - done in response to some local objections to the mural. And, with typical Robert humour, he added some flying ducks, alluding to the complainants' sense of taste!

Completed in 1985, this grand mural had suffered from the elements, and due to its condition had to be taken down permanently (shown left, in its prime in the late 1980's). After its removal in 2015, it revealed a previously unfinished painting (below right) by Robert, which itself proved to be equally as controversial as the original mural - and ironically, this prompted calls for it to be covered up...again! 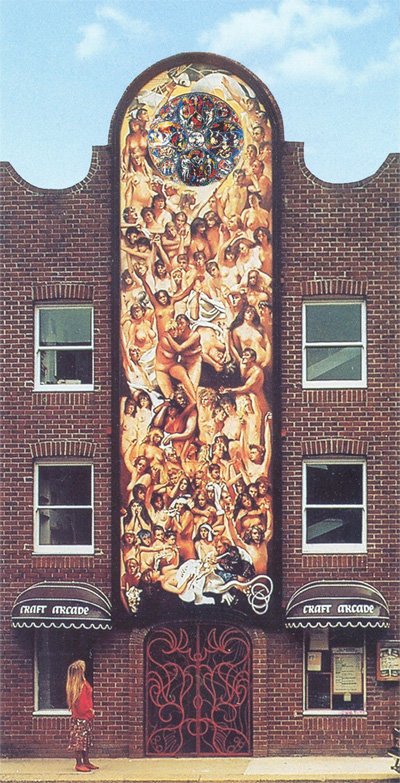 The Last Judgement mural, shown here in its prime (above, left), was an impressive three-storey-high mural with a circular stained-glass window set into the upper part of the mural, situated on Plymouth's historic Barbican area (above). The mural was painted on to eight separate sheets of fibreglass bonded marine plywood using Tekaloid paint, allowing it to last far longer than the nearby Elizabethan mural, which was painted directly on to the wall. When this mural was unveiled its scenes of nudity caused some people to object to it, due to its collection of 88 naked bodies featuring various Plymouth faces from a local doctor to restaurant owners and shopkeepers. At the time, politicians, the police and even the Director of Public Prosecutions were unsuccessfully called on by angry protesters to censor the nudes. Robert thought that the controversy was amusing.

Over time, the mural survived the initial attemps by objectors to have it censored or removed. Ironically, it was British coastal weather that has now forced it to be removed. Due to its deteriorating condition, the proprietor of 'The House That Jack Built' (the premises upon which the mural sits) was under pressure to have it taken down after a piece of its wooden frame became lose and fell off. With the mural fading and the structure in need of repair, no type of on-site restoration plan was forthcoming, so it was taken down and stored. 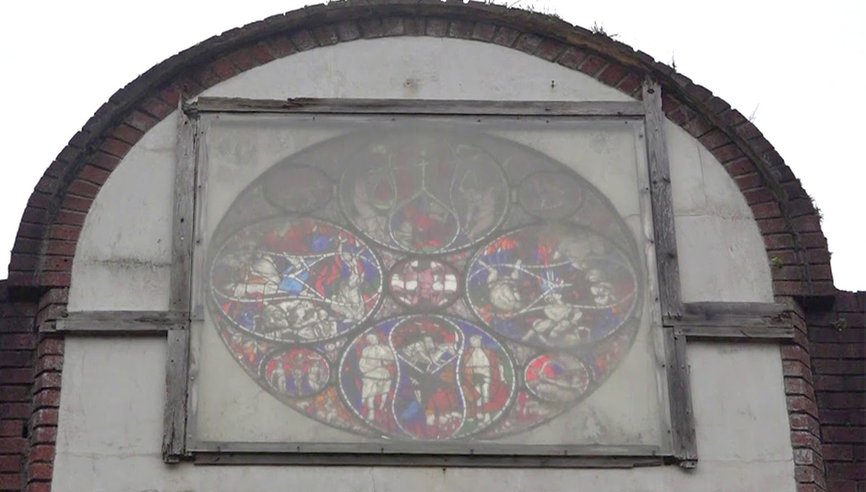 A detail of the circular stained-glass window's design for the window that was set into the top part of The Last Judgement mural.

Commissioned in 1977 this oil on canvas painting measures approx. 2.5m x 5.0m. The painting features ROL and a group of vagrants placed as isolated and dispossessed in a scene of civic celebration. Titled ' A Tribute to Plymouth's Architects and Architecture' it shows prominent landmarks such as Smeatons Tower / the Civic Centre / the statue of Sir Francis Drake and the statue of virgin and child. The persons featured are - (left) - Isambard Kingdon Brunel / John Foulston / Sir Patrick Abercrombie / J.Paton Watson - (right) - R.O. Lenkiewicz / Wee Jock / Diogenes / Dave Helingoe / Eugene / Bill / Cockney Jim /The Bishop / Myriam and an anonymous sleeping/weeping child. The painting hung for many years in the basement of Plymouth Guildhall, but is now stored elsewhere, and may be included in upcoming exhibitions of Lenkiewicz's art.

In 2013 the mural was transported to Germany for a major Lenkiewicz exhibition in Leipzig. Pictured: the removal team and organizers.

The Riddle Mural at the Port Eliot House, Cornwall

The Riddle Mural is in the Round Room of Port Eliot House in St Germans, Cornwall. The mural was painted by Lenkiewicz over a period of 30 years and is some 40 feet in diameter. The work is unfinshed. The mural is in two halves. One half depicts death, destruction, insanity, unrequited love, and the apocalyptic end of the world, whilst the other reflects love and affection, friendships, harmony, proportion and consensus. Within the overall picture are concealed various references to family skeletons, art history and cabalistic mysteries making for what Lenkiewicz called this work, ‘The Riddle Mural’ (Pictured below). 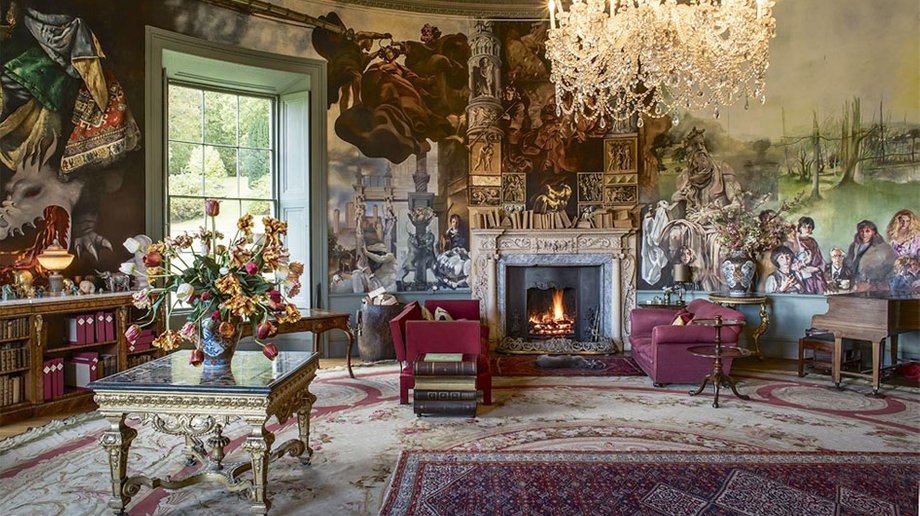 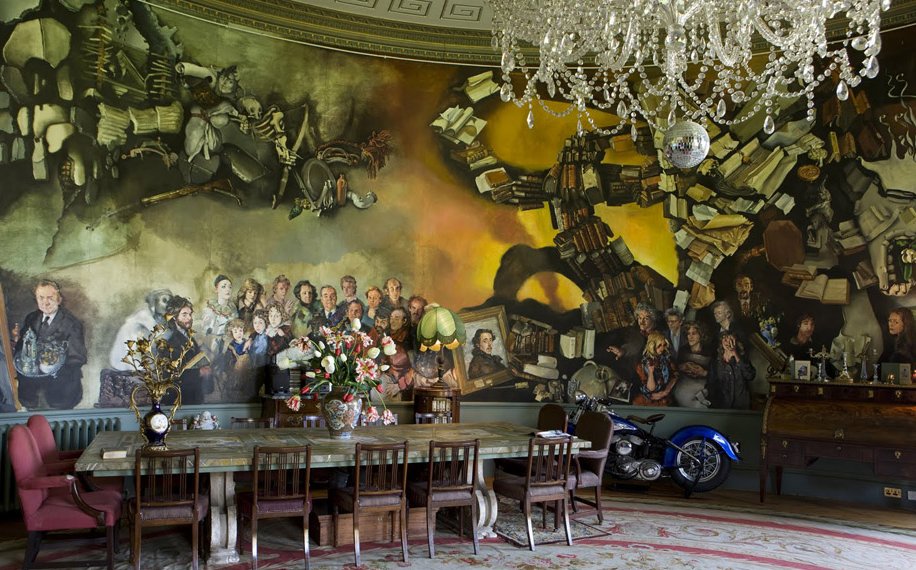 During the afternoon of Saturday May 2nd 1970, Dame Joan Vickers MP officially renamed the State cinema at St. Budeaux as The Mayflower. The idea for the change of name came from the cinema's manager, Mr. Prynne Richards, and the ceremony took place on the day that the 'Mayflower Year' celebrations were launched. The cinema was stated to seat 935. On display at the opening was a 50' x 15' mural in oils by 28 year old artist Robert Lenkiewicz. It depicted in great detail the final landing of the pilgrim fathers at Plymouth Rock. On Saturday March 3rd 1973 the Mayflower closed. From 'Plymouth's Cinemas' by Brian Mosely.

The prefabricated structure of The New Hoe Summer Theatre replaced the marqee known as The Hoe Theatre which had been in place since the 1950's. The new building held it's first production on June 8th 1962 and it's last on February 14th 1982. Demolition started on May 18th and took about six weeks. During this process one of Robert Lenkiewicz's murals was found. It had been wallpapered over, but builders managed to save part of it. Originally painted in 1970, it appears to have been unfinished in 1976 when Robert made these comments to the local press - "It is a history of the harleqinade from about 1580 to about 1860, a survey of the Italian Comedia del Arte. As usual, I selected models who live locally to represent various characters in the Harleqinade. It will take about two days work to finish and I am quite willing to complete it as soon as I have the time." The mural highlighted the controversy surrounding Lenkiewicz and his work at that time. To quote Mr. Brian Rabin from a meeting of the Plymouth Junior Chamber Of Commerce in 1976 - " It appals methat our civic leaders can frequent the Hoe Theatre without throwing up their hands in horror. The mural on the wall of the foyer shows people putting out their tongues and using Churchillian gestures. We should try to get it whitewashed and restored to order. It's our theatre and this is just an obscene gesture to the people of Plymouth. And when will it be finished? We should invite vandals to come and scrawl on it."

In 1978 the mural measuring either 40 or 60ft x 10ft, which the artist had spent four months painting was obliterated when the council decided to have the wall repapered. At the time Lenkiewicz congratulated the city entertainments officer for his 'remarkable good taste' in removing the mural. Lenkiewicz had painted the mual free of charge after being approached by the Hoe Theatre's management who lacked available funds. Local TV news footage during March 1982 shows the artist helping to reclaim the mural. Lenkiewicz produced an illustrated booklet when he painted the mural, detailing the history of the Comedia del Arte - the backbone of the english theatre. If sucessful in his attempt to save all or part of the mural, he hoped to produce the booklet again to raise funds for charity.

The Yankee Burger restaurant, 20 Frankfurt Gate was the location of two murals painted on opposite walls by Lenkiewicz in 1976. Each measured approx. 1.2m x 2.5m and continued the wild west theme of the restaurant. Local press reports during October 1976 stated; The murals, now almost completed, have however, turned several stomachs while waiting in eager anticipation of a succulent burger. Mr Lenkiewicz has introduced some of his gentlemen of the road (tramps) to the gun play of the Old West by dressing them up as cowboys and adding a few dead bodies for authentic good measure. "People get a bit upset about the decapitated head and the corpse," said american owner John Desiderio. "The head is from the body of a North Califorian bandit. When they captured him they cut off his head and stuffed it in a glass jar of alcohol and had it exhibited in a museum in San Francisco, but it was destroyed at the time of the first earthquake." Then there is a corpse clutching a pair of Aces and a pair of eights. "The fingers are holding what is known as a 'dead man's hand' - and that's the cards Wild Bill Hickock was holding when he was shot in the back of the head. People say how can you have that in a restaurant, but they don't know the story. It isn't really that gory." There is another customer who has other ideas on the subject however. He always sits with his back to the mural. 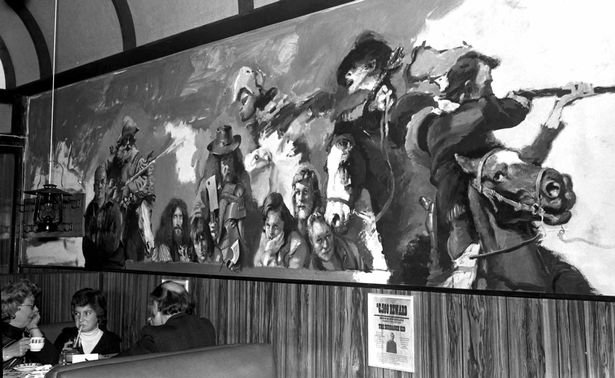 Inside the former restaurant, 1970's (unfortunately, I only have this one photograph of this half of the mural. If anyone reading this happens to own any photographs of the rest of it then please do get in touch here)!

The mural entitled 'The Ascention Into Heaven' was painted on the gable end of a house at the junction of Cornwall Street and Cannon Street. Unveiled in August 1988 by the Lord Mayor of Plymouth, Gordon Draper. It featured 100 local residents, headed by their MP, David Owen, ascending into heaven. The mural was created primarily as a colourful decorative feature that would help to raise the spirits of a local community with significant social problems. Lenkiewicz agreed to paint the mural for free after being approached by the local Tenant's Association. The mural together with surrounding buildings has now been destroyed to make way for substantial redevelopment of the area. 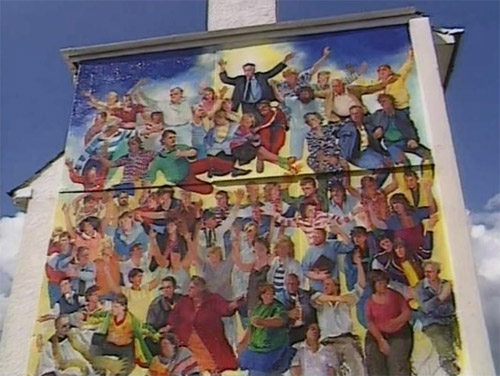 A rare photograph of the now lost Devonport mural.

Titled 'A Dance to the Music of Time', this mural is quite unlike the style of Robert's other murals. It measures approximately 10 metres long, and around 2.5 metres high. Housed in Elspeth Sitters House, Hoegate Street, formerly the Age Concern building, the building now stands empty since the charity consolidated its services to centres at Mount Gould and Plymstock. The mural had been covered up for more than 35 years. It was painted in 1982 as part of the Old Age project with the artist regularly visiting the centre to meet with older people.

A view of part of the Age Concern mural 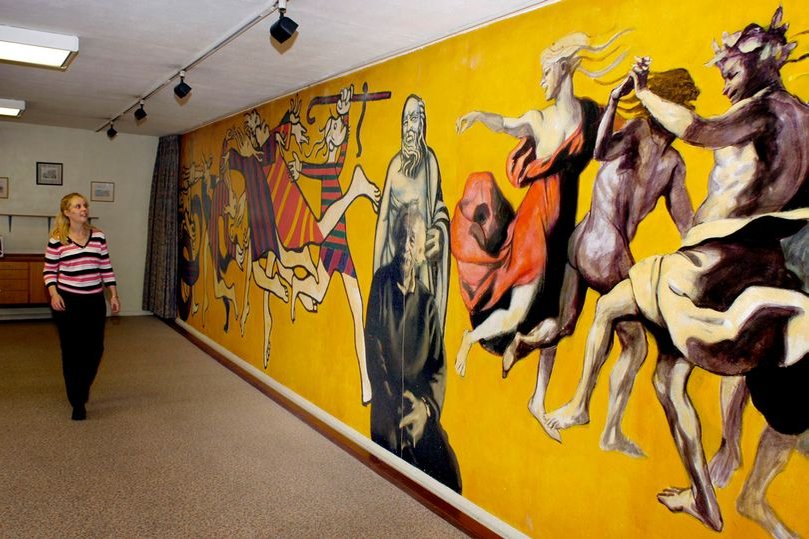 A face-on view of the whole mural

No longer in the cafe, this mural, created in the 1970's, was loosely based on The Last Supper theme. It features a self-portrait of Robert sat in the café eating a Mars bar - one of his favourite confectionaries! (note the Jewish Menorah candlestick in the foreground). When the owner of the cafe retired, he had the mural removed before selling the cafe. It was removed professionally, and they were able to remove it from the wall fully in tact, mainly thanks to the manner in which it was originally created and installed several decades prior. 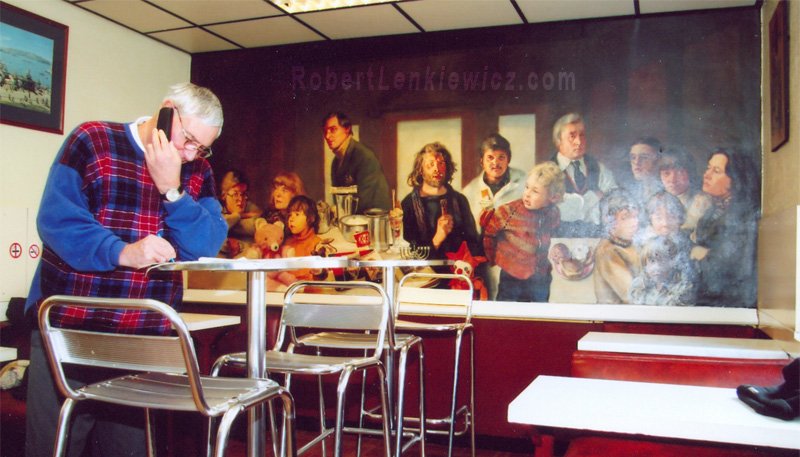 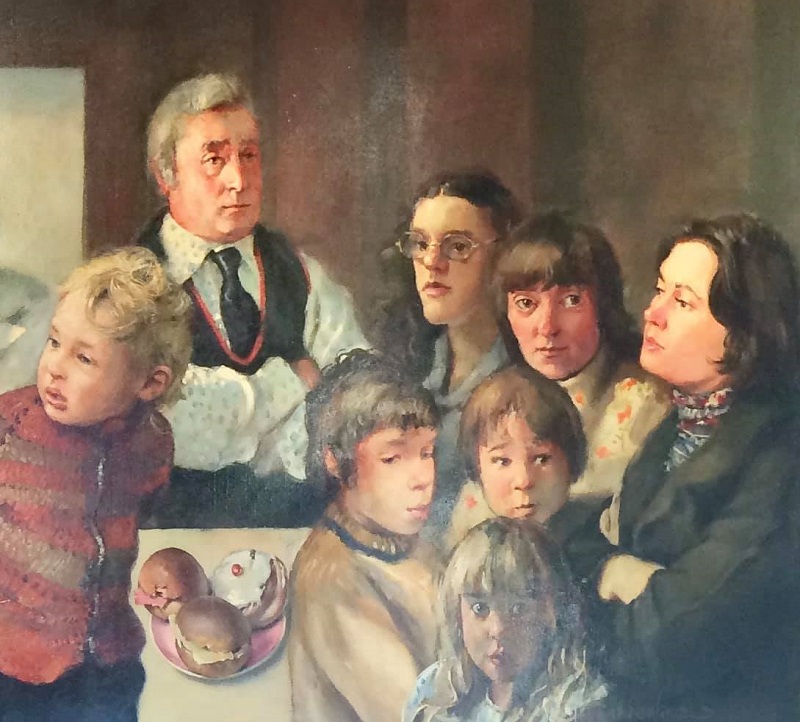 A close-up of the bottom right of the mural (the grainy photograph does not really do the mural justice!) 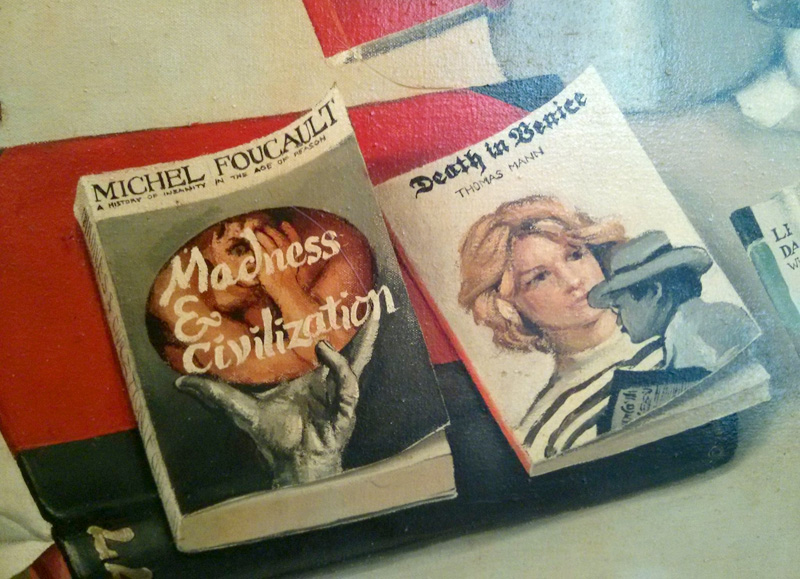 A close-up of the area that is obscured by the cafe table......you can just about make it out in the main photo!

A now lost mural once existed on a wall inside the Bella Napoli restaurant at 41 - 42 Southside Street, The Barbican. Painted in 1969, this varnished, oil on paper mural on the theme of Oliver Twist would have measured approx. 2.2m x 4.0m (including the door to the kitchen placed in the middle). Two sections did remain up until late 2000's - the largest features Nancy, the other, Oliver Twist. The missing section was concerned with three street urchins. Shortly before his death Robert expressed a wish to restore the mural. Some film footage was taken by regional TV circa 1997. Whilst building still houses a restaurant, the Bella Napoli restaurant has since been replaced by several different consecutive restaurants and owners. Awaiting photographs of remains of this former mural.

Please note: If viewing this website on a mobile device, some images will not be shown -  so please view on a computer to see all the images!